I walked my first labyrinth this past May when my family and I had visited Heritage Gardens in Sandwich, MA. “A maze!” I exclaimed to my family, but my daughter quickly corrected me, “It’s a labyrinth.” A maze is a complex series of pathways with many choices needed to be made to find a way in and out. A labyrinth is just one path in and out. All these years and I had been mistaken, using the word incorrectly when I would joke to people about having to walk through a labyrinth to get from point A to point B. I thought a labyrinth was a fancier way of saying “maze”. I also just loved the way labyrinth rolled off of my tongue with all those consonants at the end of the word that gave it that oh-so-pleasing sound.

But back to this particular labyrinth. There were a couple of other families wending their way through it, laughing, smiling and joking as they traversed it’s windy path. The amount of space this design took up looked relatively small, but we were able to start walking it as well without causing too much disruption to anyone else’s travels. It was an intriguing design with the brick lined path outlining where to walk. Crushed shells and pink granite gravel were strewn on the pathway, looking like fallen cherry blossom petals from a distance. Along the path were Korean Stewartia trees which led to the mystique displaying their patchwork of colors on the tree bark. 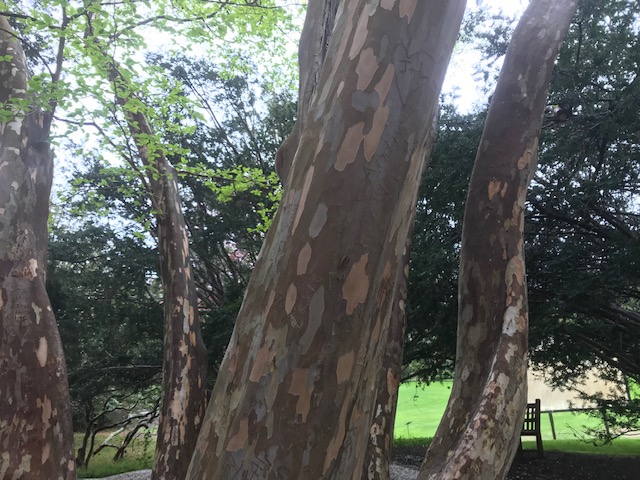 As my family and I entered the singular path I noticed how we all approached it. My kids attempted to race each other through it with my daughter as the bossy older sister smirking when she took the lead. My husband walked for a bit, but then realized it was taking him a long time to reach the center. He decided he would take a short cut by stepping over the bricks and disregarded the marked path. “You can’t do that!” I yelled with mock indignation. “You need to stay in the lines. You are cheating yourself. ” He laughed and disregarded me, but in a pleasant “I do me and you do you way”. I walked along, enjoyed the scenery and listened to the pleasing crunching sound beneath my feet as I slowly and methodically walked. The beautiful pink granite stone somehow brightened the overcast and gloomy day as we discovered this magical pathway in a lightly wooded area. After we finished our walk I was happy how it engaged all of my senses and it helped me to remain present. I appreciated seeing my family experiencing it with their own interpretations as well.

Months later I was looking for a good activity to do with my daughter as she recovered from her concussion. I wondered if there were other labyrinths out there that I could explore. Google provided me with my answer by giving me https://labyrinthlocator.com. Just put in your state and a plethora of labyrinths populated the screen. I saw there was one in a neighboring town and some others within a short drive. I excitedly told friends and co-workers of my plan. “It sounds scary” said my coworker with a grimace crossing her face. She was thinking how I originally thought, although I could see she was imagining the sinister maze depicted in the movie “The Shining” or another like the frightening one found in the Harry Potter movie, “The Goblet of Fire”. “Oh you’re probably thinking of a maze. Maze’s usually have high borders you can’t see around. The labyrinths I’ve seen in person and in pictures are not like that. Most have low borders,” I explained.

Unfortunately, my daughter and I did not make it on our trip as soon as I had hoped. But in the interim I happened upon a great find. I was at a fair hosted by a nearby metaphysical shop and one vendor had beautifully painted pottery plates with a labyrinth design. She had a canvas labyrinth one could walk if they wanted to as well. The plates were intriguing as you used your finger to trace along the path in and out. I was given tips on how to use this plate as a means to meditate and while I made the purchase I mentioned my experience with the meditative walk this past spring and how I was on the hunt for another. She divulged the location on one of her favorite ones. It was located in Westwood and it looked like it was someone’s home, but it was open to the public and had interesting scenery there such as an obelisk in the middle and other beautiful sculptures throughout the property. That’s it, I decided, I want to go and find this now. So as soon as my daughter was done with her dance class I asked if she wanted to go on an adventure with me. She agreed and a short ride later we pulled into a long driveway. Indeed, it looked like we were visiting someone’s house, but the sign declared it was called The Center at Westwoods and I recalled it was a place for retreats and classes. The property was immense and I expected a sign to announce “this way to the labyrinth”, however none was found. “Let’s walk this way,” I suggested. We saw a long green mossy path beneath some low trees and a pond situated close to it. It looked magical, like something you would see in a fairy tale. Maybe this would lead us to the labyrinth? But no, it lead us on a short walk around the small pond with the moss feeling spongy underfoot. Hmmm, where else shall we walk? I saw another path beneath some pine needles and suggested we walk that way and as we did we walked past a sign warning against trespassers who were not invited guests. Yikes! Maybe there were video cameras posted somewhere nearby catching footage of my daughter and I as we unwittingly committed our crime. The police would arrive and arrest us as I would pleadingly tell them someone told us we could come walk the labyrinth! So charges of trespassing and concerns for my mental heath would be levied against me in court. But then something in me snapped to attention that the person I met this morning surely wouldn’t have sent me here if it was closed to the public. The pine needle path brought us to a shedlike building, but no labyrinth lurking nearby. I peered furtively over my shoulder for police or the property owner before looking around again for the fabled labyrinth. I suggested we get in my car and drive around the building where I saw a small courtyard and a grassy field beyond it. “Look! There’s a sign there that says labyrinth,”my daughter helpfully pointed out.  I got out of the car and walked towards the sign. Before me was the small serene courtyard, but yet the labyrinth did not appear before me. My daughter was impatient and had enough of our trespassing adventure. “I guess we’ll drive over to the one in Franklin then”, I said a bit dejectedly.

Taking back roads we arrived at a local Universalist church. A box truck with two people standing near it were in the parking lot and thought we had come to donate something for their collection drive. I drove by them as I waved to indicate we weren’t there for a donation and drove to a spot nearby that looked like it was close to the labyrinth. My daughter remarked we appeared to be doing quite a bit of trespassing this day. I told her it was fine, that people visited this place frequently. We took a small path at the beginning of the nearby woods and lo and behold peeking out beneath freshly fallen leaves were the bricks outlining the labyrinth. Oh happiness! Earlier that day the vendor gave me insight on what to do when walking a labyrinth. She suggested on the walk in to think about things blocking me or causing negativity and invite them to be released. Then once in the middle I could meditate and then as I made my way back I could think of what positive I wanted to come out with me. I told my daughter what was explained to me and she slowly led the way. I followed behind while I admired the scenery around me, every now and then lowering my gaze to my feet to be sure I did not trip. The sound of rustling leaves as I walked was soothing while I contemplated what weighed heavily on my mind. I stood in the middle briefly while closing my eyes and raising my head up while I wished for peace. Then I slowly walked back out to join my daughter as we headed back to the car. 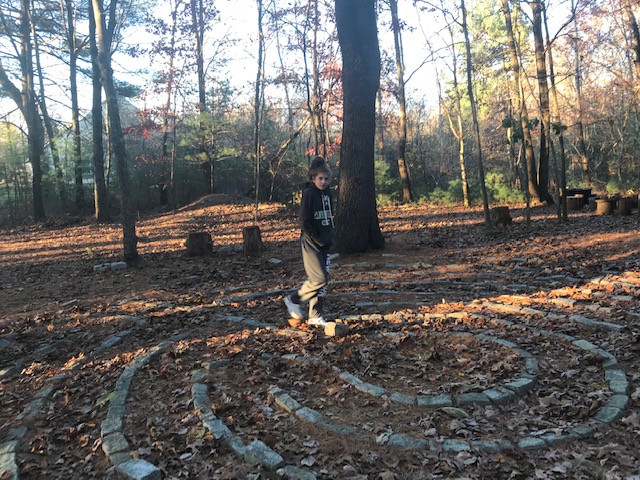 The next day I took a small group of friends who were intrigued about  labyrinths as I was. I imparted my little knowledge about how a labyrinth is not a maze and what one could do as they wandered this one path. So we each went along until we arrived at the center and one by one we grabbed one another’s hand as each person joined and created our own little meditative circle. I was happy that my friends enjoyed this experience as much as I had.

I now have my labyrinth plate to do a daily meditative journey if I wish. Tracing the path with my finger is calming as I feel the slight vibration from the windy, groovy path and small bumps on the painted pottery. This will get me through the cold winter months while the outdoor labyrinths are currently unavailable. But come spring I plan to set out on another adventure to find the labyrinth that previously eluded me or maybe I will find others nearby to explore. 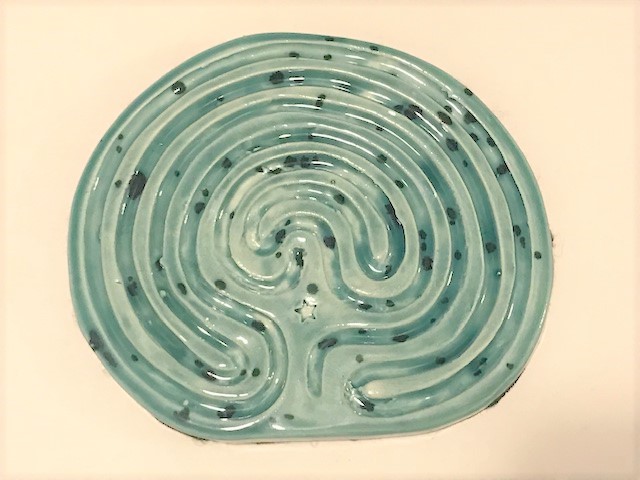 2 thoughts on “For the Love of Labyrinth”